Comprised of zany, creative and highly musical comrades, Grant Farm members include Grant (aka “The Champ”), Adrian “Ace” Engfer (bass and vocals), Sean “Magic” Macaulay (drums/songs) and Kevin “Money” McHugh (keyboards and vocals). Built on the fundamentals of love, family, and virtuosic musicianship, the band is a sure bet for fans of high-energy, authentic artists as diverse as Sturgill Simpson, Chris Robinson Brotherhood and Phish.

Skilled and seasoned with an air of professionality, Grant Farm has created their own unique Cosmic Americana sound which lead them to build a strong following of Farmily across the country. Togetherness brings greatness, as is built into the band name - a light-hearted spin on the industrious "Ant Farm". 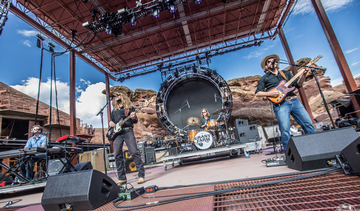