Born in Iran to an Iranian father and an American mother, Moody Molavi found at an early age how to read the comedic moment in any situation. His family moved to the Southern U.S. in 1981, where Moody used his funny personality to escape multitudes of adverse moments in his young life. Moody was bullied by Iranians for being an American and by Americans for being an Iranian. This actually still happens to him on a regular basis as an adult.

Moody and Kelley Molavi have a desire to bring their ministry known as, "Human I Thank You" to the hearts of everyone that he meets. It is a simple idea of Service over Fear. As much as it pains to hear it, the initial idea that floats in one's mind about the new person that finds their way in one's path is to think, "Is this person bad for me?"

The word, "humanity" broken up in a text message, "Human i ty" or Human I Thank You, is a reminder to serve the person first. Smile, ask the person's name, and develop a relationship. That person may be there for the growth of both you and the people around you.

Based out of Nashville, Tennessee, Lee Hardin has been touring the country relentlessly, performing in comedy clubs, churches, corporate events, and once on a farm for prisoners. His work on the road paid off in 2019, with the release of his Drybar Comedy special , “Not Quite A Grown-Up”, which is available to watch for free on the Drybar Comedy app.

His quirky and clever approach to comedy, and his stories about Taco Bell, and being an only child with bunk beds, have led him to share the comedy stage with acts like Henry Cho, Ryan Hamilton, & Nate Bargatze. Lee has also been able to perform as a warmup act for The Mike Huckabee Show.

In 2019 Lee was a Top 10 Finalist for Jeanne Robertson’s “Comedy With Class” competition. 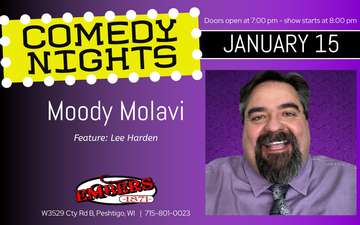